Ascension of the Black Christ Painting 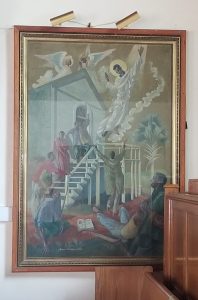 Gordon R. Girvan of Toronto gave the painting of the Ascension of the Black Christ to First Baptist Church in 1980.  Mr. Girvan was born in Saint John, New Brunswick, grew up in Halifax and lived in Toronto for many years.  As a travel agent and president of the American Society of Travel Agents, he had the opportunity to travel all over the world.

The artist is Hector Whistler, nephew of the famous Whistler who painted his grandmother in a rocking chair.  He painted the “Ascension of the Black Christ” in Barbados in 1954. Mr. Girvan met Mr. Whistler during a trip to Barbados; he was immediately impressed by the fine painting in the Black Christ.

In 1980 when the painting was presented to The First Baptist Church, Mr. Girvan was retired and living in Central Park Lodge.  It was his hope that we, as a congregation, would find inspiration and joy in the painting as much as he had.

The painting is oil on canvas, approximately four feet by seven feet. It depicts Christ as a black man, surrounded by his disciples as he ascends to heaven with angels around him.  The painting is well known all around the world and has been shown to many thousands of people in ecumenical congresses and exhibits.  It gave Mr. Girvan great pleasure to make the gift of his painting to the Church.

Update Personal Details
Your ticket for